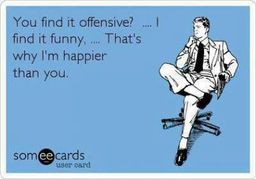 As both a stand-up comedian and comedy club manager, I often get complaints from audience members who are “offended” by something I or one of our Punchliner headliners have said onstage. But if you ask me, getting offended by stand-up comedy is like getting burned by the sun: both are easily avoidable. All it takes is a little sunscreen and maturity. Before you go to the beach, lather up; before you go to an R-rated comedy show, grow up. (Or at least do a little research about the comedian you’re about to see.) Whether you walk into one of our adults-only comedy shows beet-red from the sun or leave it beet-red from indignation, my response will be the same: “Well, what did you think was going to happen, you freckled @#$% ?” (See? I purposely censored myself so as not to offend you.)

Although I don’t enjoy offending people, I have little empathy for people who claim to be offended by the words, ideas or opinions of others. In my opinion, being offended is not a real thing. It’s an irrational state of mind that people lacking in emotional intelligence create for themselves by interpreting the words and intentions of others through mental filters based on their personal issues, prejudices, fears and, more often than not in comedy clubs, copious shots of Jägermeister. I believe this because I find myself being offended by things people do and say all the time. Fortunately, most of the time I can catch myself immediately and calm myself down by talking myself through my upset until  realizing that I alone own my feelings. So instead of going off on the person whom I’ve allowed to push my buttons, I’ll quietly walk outside and key his car.

Part of being an adult is being able to react maturely and reasonably to ideas and opinions that differ from one’s own.  In my humble—and 100% correct—opinion, comedy club patrons who express their displeasure with a comedian’s routine by  making a big deal about how “offensive” it is are exhibiting a lack of both reason and maturity and should stop going to comedy clubs and join the presidential race instead.

To clarify, I’ve got no problem with guests who express their opinions politely. For these folks, I’ll go out of my away to be a good listener and say whatever I can to make them feel better. I’ll apologize profusely, suggest another show which may be up their alley, and reserve them front-row seats for that show. What I won’t do, however, is throw the comedian in question under the bus by agreeing with the guest’s assessment of his act should I feel otherwise. If I feel a guest’s criticisms are spot-on, I’ll incorporate those comments into the comedian’s end-of-cruise performance evaluation. If I feel the guest is off base, however, I’ll listen politely for as long as he can keep his critique civil. “I don’t find this comedian funny!” is an opinion I can accept and work with. But as soon as some touchy hothead starts drifting over into “This comedian sucks—he’s not funny at all!” territory, it takes all the willpower I can muster not to pull the pin on a snarky-comment grenade and shout,  “What’s that?! You’ll have to speak up! I can’t hear you on account of our being surrounded by five hundred other people laughing their asses of at that hilarious comedian onstage right now!”

So you see, I’ve got no problem with paying (ahem!) customers expressing their honest opinions about any sub-par comedians I have a hand in recruiting and reviewing. In fact, even when the rest of the room is rolling in the aisles, there may be one lone wolf in the crowd who isn’t buying the crap the comedian is selling and who may very well win my respect by identifying that comedian as a headliner wannabe or, as I call such acts, “The Emperor’s Closer.”

No, my beef is with folks who get on their high horse and demand to either have a comic fired or at the very least be forced to drop the “offensive” bit in question. The problem with these folks is not the feelings of anger, disgust, frustration or indignation they experience when hearing a joke or premise they disagree with; the problem is their thinking that those feelings are more valid or important than either the feelings of release and purposefulness experienced by the comedian expressing himself onstage or the feelings of joy and happiness experienced by the other three hundred or so people in the audience who are guffawing their heads off. In other words, when an irate audience member claims to be offended by a joke she is basically saying that, in her opinion, the joke, which is the comedian’s opinion, is invalid, as is the laughter response of the other audience members, which is their opinion, and so in her opinion, the only opinion that matters in this case is her opinion. Well, in my opinion, people who share that opinion should be playing in a sandbox with a bunch of three-year-olds and not taking up seats in a comedy club.

The most ridiculous aspect of such complaints is the offended customer almost always thinks the comedian offended him on purpose. Few comedians derive any joy out of offending people. Stand-ups are by nature very paranoid people and are worried constantly about not being liked and not getting booked. Besides, although a stand-up’s job is to reinterpret everyday experience from an angle the average person would never consider, his ultimate goal is to make people laugh and feel good. And so, because of that and the fact that most comedians are extremely self-centered, we almost always assume that everyone in the audience is going to agree with our point of view. So if we think something is funny, we assume everyone will find it funny. However, every journeyman comedian knows that the audience is the final arbiter of what’s funny and what’s not, so if we try a bit a few times and the majority of the audience rejects it, we’re not going to keep it in the act. Meaning, every time one or two members of an audience are offended by a bit or find it terribly unfunny, hundreds if not thousands of people all around the country—or around the globe, even—have already laughed at it as opposed to being offended by it. (Of course, hate speech is something else altogether. But that’s where the audience comes in. What these “I was so offended” people don’t understand is if a comedian is truly out of line and a joke really is in bad taste, the whole audience will, more often than not, turn on him and let him know immediately. If you don't believe me, just ask Michael "12 Years an Outcast" Richards.)

In my opinion (the three most important words in this essay), too many cruise-ship passengers, when watching stand-up comedy shows they neither paid for nor were forced to attend, have the mistaken belief that their opinion is more important than that of the artist onstage or the other cruisers in the audience. And, in some cases, some of them may actually come to a comedy show looking for something to be offended by because the feelings of self-righteousness and outrage they experience get the endorphins pumping more than a bucketful of free ice-cream on Lido Deck. Fortunately, these folks are in the minority. Unfortunately, they can multiply like Gremlins whenever the cruise line coddles them like children instead of treating them like the adults they’re supposed to be.

In a perfect world, our ship’s Guests Services associates would be empowered to answer all complaints regarding the content of our clearly advertised “eighteen-and-over, uncensored, anything-goes, adults-only” late-night comedy shows that are “not for the easily offended” with: “Let’s see here: You know you’re someone who is easily offended yet you still opted to see an adults-only, uncensored comedy show which was advertised as not being for the easily offended, and now not only have  you been easily offended, but you also have third-degree burns all over your body from lying out by the pool all day with no sunscreen?