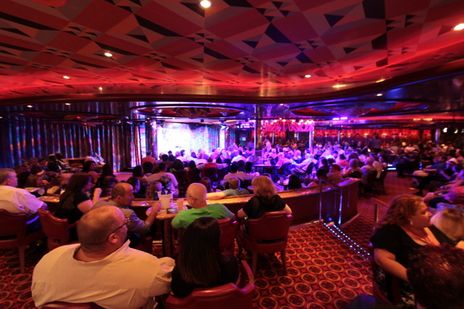 My least favorite part of being our ship’s comedy club manager is turning over the showroom between shows. A hard partying crowd of 600 people can leave enough empty beer bottles and cocktail glasses in their wake to make the Punchliner look like Motley Crϋe’s tour bus. So in order to clean the room in ten minutes or less—and to ensure that guests waiting in line for the next show can get good seats without having to shove a fellow guest overboard—we ask the audience to exit after every performance. Not surprisingly, guests are less than thrilled by this policy, because it forces them to do two activities cruise ship passengers are notoriously reluctant to engage in: following instructions and leaving the sitting position. But I find that if I attach a free drink coupon to some fishing line I can usually coax them all out eventually.

Not every guest gives me a hard time about our policy, but those who do make my job way harder than it needs to be. These people have been on the ship less than 24 hours and yet suddenly they’re experts in running a comedy club: “I have to leave now that the show is over and people are already lining up outside for the next one and your staff needs to clean up and reset the showroom in less than ten minutes? That makes no sense!”

“Of course that makes no sense to you,” I feel like screaming back, “You’ve never set foot in our club before! But maybe if you were an experienced crowd control expert who possessed firsthand knowledge of the type of traffic flow problems our carefully considered and thoroughly tested policies and procedures have been designed to prevent, instead of a vacationer seeing live stand-up for the first time, perhaps you wouldn’t be so befuddled. You may have paid to be here but I get paid to be here, so whaddya say you keep drinking yourself blind and I’ll keep doing my job?

I’ve never understood “that makes no sense” as a guest’s go-to objection to our shipboard policies. Of course it makes no sense: you haven’t received the same training that we have nor are you privy to the same information we are. If you were to take a trip to Dick’s Sporting Goods, I’m sure that the machine that drills holes in the bowling balls would baffle the bejesus out of you. But to the guy who has been trained to drill the holes in bowling balls, the ball hole drilling machine makes perfect sense. And maybe if he were to drill a couple of holes into your skull, it would drain enough “stupid juice” out of your noggin so that from now on you’ll no longer demand that things make sense to you immediately and instead learn how to ask intelligent questions that might lead to you having a wider frame of reference, which will lead to better understanding of our polices, which will lead to you realizing that we have your and your fellow guests’ best interests at heart and have no intention of inconveniencing you or ruining your vacation, so please stop thinking that paying for a cruise makes you a senior vice president of the cruise line.

Similarly, when I board an airplane, none of the dials or levers in the cockpit makes sense to me. Difference is, the fact that those dials and levers make no sense to me makes perfect sense to me--because I’m not a pilot! But I’m pretty sure that if I took flying lessons for a number of years, spent thousands of hours in the air before finally obtaining my commercial pilot’s license, all that technology in the cockpit would one day make perfect sense to me. I’m also pretty sure I’d be even less tolerant of idiots that I am now:

“I can’t believe we have to wait an extra twenty minutes before takeoff just because one of the engines fell off the plane—that makes no sense!"