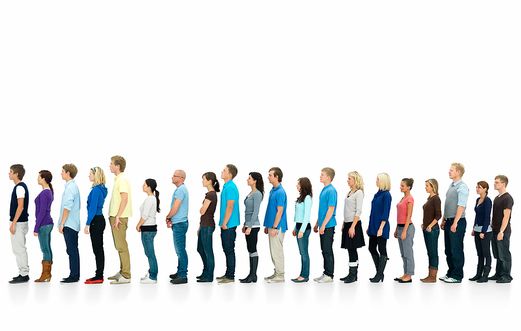 If there’s one thing cruise ship guests hate it’s waiting in line to see a free comedy show. It fact, some guests get so mad they look like they want to hit me. Only reason they don’t is the line for beating me up is usually longer than the line for the show.

In all fairness, I can see why people on vacation wouldn’t want to wait ten minutes to see a forty-minute comedy show. These are the same people who’ll wait in a three-hour line at Six Flags for a two-minute roller coaster ride. The same people who’ll camp out on Canal Street in New Orleans at nine in the morning for a Mardi Gras parade that doesn’t start till noon and won’t reach them until four in the afternoon. The same people who’ll sleep outside an Apple Store all weekend just to buy the new iPhone even though they still haven’t figured out how to use their previous iPhone. The same people who’ll, on the first night of the cruise, spend forty-five minutes in a Free Liquor Tasting line that circles the lobby of the ship just so they can down a thimble-sized sample of Baily’s Irish Cream. So, yes, I can see why waiting ten minutes for a professional comedy show would be too much suffering for their fallen arches to endure.

There’s something about lines (or “queues,” if you’re British) that brings out the worst in people. On a nightly basis I observe grown adults cut the line, save spots for friends, nit-pick about who was standing where, push and shove, scream and shout, and then become verbally abusive (or “get all Parliamentary,” if you’re British) with me or my assistants when confronted about their behavior. Other guests will refuse to join the line altogether and try to start their own line at the exit of the comedy club, refusing to move as they’re trampled by a stampede of 600 departing guests in search of free pizza and ice cream. It’s nights like that that make me wish there were more icebergs in the Caribbean.

Some of my superiors believe that turning a blind eye to such childish behavior falls under the heading of Good Customer Service. I do not. I believe that when passengers pay for a cruise they are paying to travel on the ship, paying to sleep on the ship, paying to eat on the ship, and paying to enjoy the free live entertainment offered on the ship. They are not paying for the right to interfere with our operation, supplant our policies with their own, defy or disrespect our team members or infringe upon the fun of their fellow guests through rude, selfish or discourteous behavior. For that we charge extra.

In my opinion, passengers are called “guests” for a reason: the ship is our home and they are just visiting. In my cruise line’s opinion, however, passengers should be considered “part of the family.” Fine. But if you ask me, that’s even more of a reason for us to call guests on their crap. I’d love to see our more problematic passengers try to pull the same shenanigans in the home of a close relative and see what happens. Try telling their Aunt Clara and Uncle Eugene how to run their household, spill food on their furniture, leave dirty dishes on their stairs, make noise at all hours of the night outside their bedroom door and speak rudely or disrespectfully to them or their cousins and they’ll find themselves at a Motel 6 faster than they can say, “It may be your house but it’s my vacation.”

I love my job and I love my ship. I also love the vast majority of guests who cruise with us week after week. So, please come sail with us soon. I’ll do my part to make sure you have the best cruise ever. But, to echo something we’ve all heard our fathers say a million times while growing up: If you cruise under my roof, you cruise under my rules.

Got a problem with that? Get in line.