Children of the All-You-Can-Eat Corn 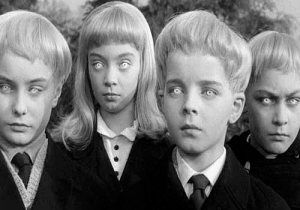 If your main reason for going on a cruise is to get away from your kids for a week, make sure you pick the right week. If you go during summer vacation, winter holidays or spring break, you’ll be trading your kids for other people’s kids. And after watching them charge around the ship with no supervision, knocking over old ladies with walkers, crashing into waiters balancing huge trays of nine-dollar drinks, and cannon balling pool water onto your Kindle, you’ll wish you had brought your kids along just so they can throw these little Grandsons of Anarchy a beating.

Although most ships have one or more kids’ clubs that keep the little angels occupied during the day, the nighttime is when they grow their fangs and sprout their demon wings. If you've cruised before, you may have observed them in the hallways, on the stairwells or in the elevator lobbies well past midnight:  Gangs of preteens roaming the ship like prepubescent marauders--laughing and shouting, blasting Miley Cyrus on their iPhones without headphones, riding the elevators up and down for no reason, and just plain annoying the hell out of anyone unlucky enough not to own a tranquilizer gun with a laser sight. Sure, you can call Security, but Security will always say the same thing: “Sorry, sir, but we asked those kids if they were causing trouble and they said, ‘No’.”

Although teenagers and preteens can be loud and obnoxious, a disapproving stare is usually enough to settle them down. It’s the little kids with no “off” switches that’ll drive you crazy.  Cruise at the wrong time of year and you’ll be surrounded by sugar-crazed kiddies hijacking the ship like miniature Somali pirates. Kiddies screeching in the dining room. Kiddies crying in the comedy club. Kiddies peeing in the hot tub. Kiddies looking innocently up at you with cute, excited little faces just as you’re about ready to kick them down a flight of stairs, causing you to pat them on the head and say, “Have fun, sweetheart—but be careful!” instead.

Even though I love children and am used to them wreaking havoc on the ship, my fantasies of punting them overboard never last more than a second or two. That’s how long it takes for me to imagine what I’d do to their parents, instead, should I find them. (Which is impossible because the majority of parents remove their children’s leashes at the beginning of the cruise, never to see them again until claiming them on the luggage carousel in the terminal at the end of the cruise.)

As the cousin of the parents of two wonderfully behaved youngsters who managed to enjoy their first cruise on my ship immensely while causing no trouble whatsoever, I know it’s possible for kids to have the time of their lives without ruining the cruise for adults.

Unfortunately, my cousin and her husband were fined heavily by my cruise line for their children’s exemplary behavior. Apparently, the front office feels that well-behaved kids risk ruining the fun vacation atmosphere we're known for. That’s why every parent is supposed to receive a “Complete Idiot’s Guide to Being a Complete Idiot: Cruise Ship Parenting 101” pamphlet that helps children enjoy their cruise more than the people who actually paid for it.

So the next time you want a break from your kids, don’t go on a cruise—go to Chuck E. Cheese. It’ll be much quieter.